In recent years Disney has played one of its best cards by appealing to the nostalgia of all the children of the 90’s who are now on their way to becoming adults and have brought us the Live-action, the classic stories of our childhood now brought to the big screen by real actors who play themes to attract small and not so much.

This year was excellent for Live-action, at least mostly they left me satisfied. In this post we will comment on one of my top Aladdin, or at least its original 1992 version is among my 5 favorite animated movies.

Aladdin is a thief who falls in love with the Sultan’s daughter, Princess Jasmine. In order to conquer it, he will accept a challenge from Jafar. Aladdin will have to enter a cave in the middle of the desert and get a magic lamp that contains the Genie who will be in charge of granting all his wishes.

We have one of the best fables, the thief who is really not so bad falls in love with the rich girl and in an incredible twist of fate finds a way to pretend to be someone of money to bring their attention and what is even more magnificent is that she falls madly in love with him, but not with her money but with her feelings, because both are noble and tender and good triumphs and everyone lives happily ever after. Ok, maybe it was to minimize history a lot, in fact the moral if it is good, that we are worth for what we are, not for what we have, something that perhaps is not always valued. 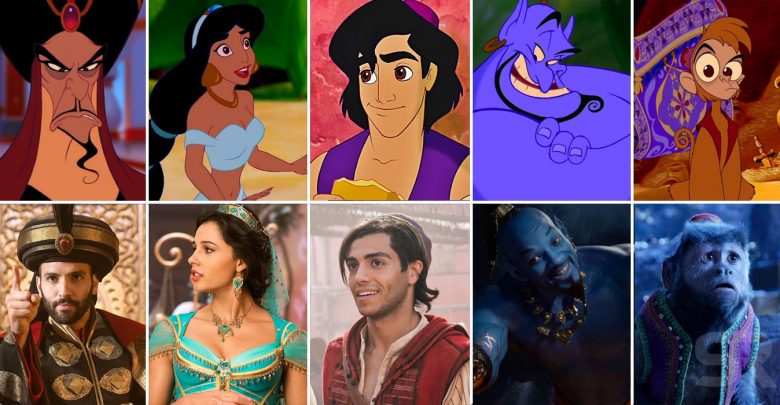 The well-known original story did not undergo so many changes, in my view, the essence was respected, we had our important scenes and more than anything, new versions of the incredible songs, so with those details I consider myself satisfied.

Modern contributions to history somehow adapt to current times and social spheres. The two approaches in which they gave more weight and logic to the character of Genius, where he is not only a secondary character, but now also has a story of his own, a new romance and a before and after, and perhaps most importantly, they understood that the fact that there was a blue man walking everywhere had to get attention and they changed it to a “more human aspect”.

The new Jasmin is a strong and independent girl, who is looking for her own voice and will not be let down by anyone, honestly I am an excellent role model for the new generations.

Aladdin (Mena Massoud) is a nice and good-hearted boy, it shows a little more the suffering he has when being alone in the world, a message that perhaps is not so clear in the animated version, besides that he is more charismatic and human It shows more mistakes and bad decisions, which does not make it my favorite, although it is understood that the temptation to have the lamp is too much, who knows what wishes we would ask if we were in their place. The actor meets both physical and acting requirements for the character, his smile in particular is very similar to the original Aladdin. Jasmin (Naomi Scott) wants to govern without the need to be married, wants to lead his people in a noble way and be worthy of this role, a slightly more feminist version of the original without clashing with his personality or natural essence, I loved it Speachless’s song, and the actress’s interpretation is actually very good.

Jaffar (Marwan Kenzari) on these issues the villains are key, because in the animated versions the cartoonists exactly to fulfill their function, are feared, hated and understand that they are the bad guys in history. Which is not easy for a person of flesh and blood to achieve, here perhaps he would give them average rating, the villain is evil but not as feared as his counterpart of the nineties. As far as the actor is concerned, let’s pause to admire him for a moment (yes, I know you’re looking at his picture now) here I had a surprise since I didn’t expect the bad boy in the story to be so attractive. (Very good Disney)

The Genie (Will Smith) in his previous version had Robin Williams giving voice and life to this character, needless to say, that shoes are impossible to fill. Even if someone could give it their own touch, Will Smith was a perfect choice, it brings a new essence and kind of comedy, not imitating Robin Williams but being the same and presenting us with an updated version of the classic.

Dalia (Nasim Pedrad) the big surprise, especially since this character did not exist before, however it was a very wise decision, it gives us a more in-depth perception of life in the palace, she is a faithful friend for Jasmin, a romantic couple of Genius and an excellent source of comedy. The actress left me delighted since her participation in New Girl, so golden star here.

It does not improve the old version, but modernizes it, it is a good offer for new generations, although it may not be the best film of our time, but it fulfilled its function, to bring the characters of the imagination to a more earthly world.